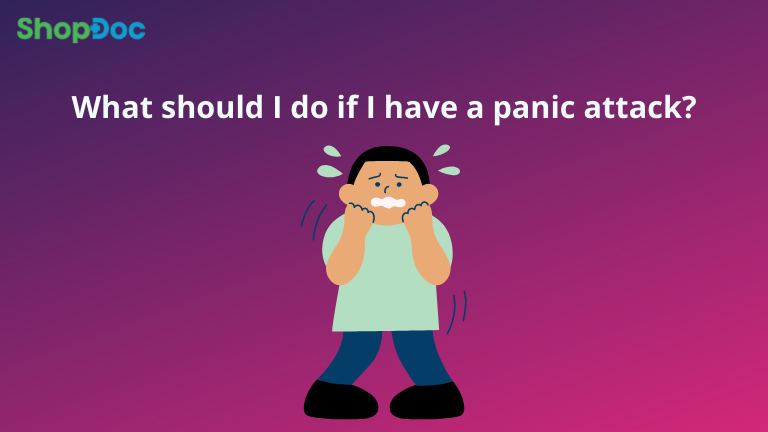 What is a panic attack?

Anxiety and panic are feelings that everyone has at times. It’s a natural reaction to threatening or stressful events, but in the case of a panic attack, it occurs when there is no real danger or obvious reason. A panic attack is a sudden episode of intense fright that generates severe physical reactions so panic episodes can be extremely terrifying. You may believe you’re losing control, suffering a heart attack, or even dying when panic attacks strike.

Panic attacks usually strike unexpectedly and without notice, so they can happen while you’re at the gym, school, driving, or in the middle of sleep. You may experience panic episodes once in a while or on a regular basis.

Hence there are many different types of panic attacks, but the symptoms usually peak within minutes. After a panic episode has passed, you may feel tired and worn out.

Some of the following indications or symptoms are common in panic attacks:

During a panic attack, some people may suffer chest pain and a sense of disconnection from reality or themselves, leading them to believe they’re having a heart attack. Some have described themselves as suffering a stroke.

Panic attacks can occur for a variety of reasons, and they can also occur for no apparent reason.

So if you do have the following, you’re more likely to encounter them:

When you’re exposed to a trigger, you’re more likely to have a panic attack, although triggers differ greatly from person to person. There may be no obvious cause in some circumstances.

Some people, however, believe that social gatherings, scenarios like public speaking or that remind you of past or current stressors in your life can set off an attack for them.

Can panic attacks be cured?

Panic disorder can be diagnosed and treated in four to eight weeks with antidepressant medication, behavioral treatment, or a blend of the two.

Physical activities, particularly aerobic exercise will assist you in reducing stress, releasing tension, improving your mood, and boosting your confidence.

Every day breathing exercises can help to avoid panic attacks and to ease them when they occur.

CBT or cognitive behavioral therapy can help you recognize and change the negative thought patterns that are contributing to your panic attacks.

If you are experiencing symptoms of a panic attack, seek medical attention as soon as possible. Panic episodes are not hazardous, despite how unpleasant they are. However, panic episodes are difficult to manage on your own, and they may worsen if not treated.

Because panic attack symptoms can mimic those of other serious health concerns, such as a heart attack, it’s critical to have your symptoms assessed by your primary care physician if you’re not sure what’s causing them. For more help and support contact us on 1800 889 2559.