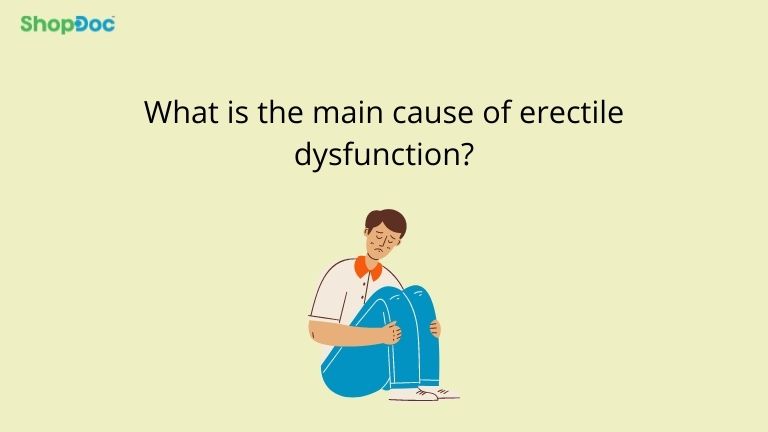 Understand that having erection trouble from time to time isn’t necessarily a cause for concern because it can happen due to anxiety, tension, or your mental state at some moment. If erectile dysfunction is an ongoing issue it can cause stress and problems in your relationships then it should be consulted and treated by a doctor.

During an erection, nerves release some chemicals that increase blood flow into the penis so the blood flows into two erection chambers in the penis, made of spongy muscle tissue named the corpus cavernosum and these tissues trap the blood inside. The blood pressure in the chambers makes the penis harder, causing an erection.

When a man has an orgasm, again nerve signals reach the penis and cause the tissue corpus cavernosum in the penis to contract and blood is released back into the circulation system, the erection comes down and the penis goes back to its soft and limp state.

ED becomes more common as you get older But it’s not a mandatory part of aging and can be treated at any age.

emotional issues can also be the villain.

erectile dysfunctions can be due to physical causes like:

Cancer treatments near the pelvis or in the pelvis region can cause erectile dysfunction.

When there is no blood flow into the penis, there wouldn’t be adequate pressure inside the blood pressure this can be due to health conditions like heart disease and high blood sugar (Diabetes)

Side effects of drugs can cause erectile dysfunction in men.

Psychological or emotional factors are the most common form of erectile dysfunction hence you may develop the condition if you have one or more of the following:

Most of us think erectile dysfunction is an issue for older people,

but a recent study suggests that According to some estimates it affects 8% of males aged between 20 to 29 years and 11% of those aged between 30 to 39 years.

So remember erectile dysfunction is a cause for concern if it persists for days. You should consult a doctor and find the root of the issue. ED is often a symptom of another health problem or health-related factor.

How do you fix erectile dysfunction ?

Depending on the severity of your erectile dysfunction, you might have various treatment options but give a check on the side effects of the treatment before moving ahead with the treatment.

Your doctor can explain the risks and benefits of each treatment and will consider your and your partner’s preference so the treatments can be taken,

sildenafil (viagra), tadalafil, vardenafil, avanafil taking one of these tablets will not automatically produce an erection.

Sexual stimulation is needed first to cause the release of nitric oxide from your penile nerves so these medications amplify that signal.