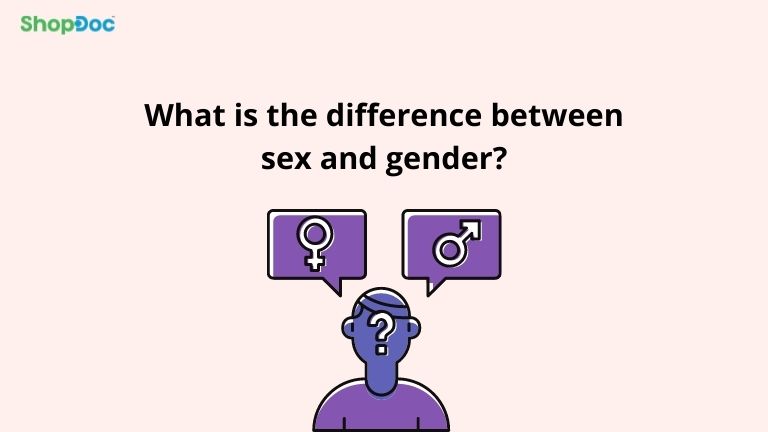 From a single point of view, you may feel like sex and gender are the same.

But, when we dive deep into the details, we eventually realize that both of them are different. In this article, we will cover all your doubts.

In short, “sex” refers to the physical difference between people who are male or female.

To make it more clear, sex is based on their biological nature. Means, based on a person’s genitalia and chromosome composition.

Now let’s consider gender, it is based on a person’s identification in society. Gender is not like sex, it is difficult to explain it in two short sentences. It is a much more broad spectrum. Many things may define a gender of a person.

But don’t worry, we are here to help you.

As mentioned earlier, sex refers to anatomical and physiological details. As we know, male and female genitalia are different and both bodies have distinct hormone structures.

In males, testosterone is the main hormone. While in females, it is estrogen and progesterone. Also, females have two copies of the X chromosome, and females have one X and one Y.

Sex is not a definitive one. There can be slight variations. So, possibly there are three categories of sex. Male and female as we discussed earlier. Moreover, there is also a category called intersex.

Let’s take a look at how is the biological structure of an intersex person.

The term intersex describes a lot of people who don’t meet 100% of the criteria.

They will have different kinds of variations. Those variations can be in sex chromosomes, external genitalia, and reproductive system.

Also understand that your sexual behavior, who you are attracted to, personal identity, and relationships are the forces behind your sexuality.

Defining gender is a broad area. It cannot be explained based on biological or anatomical findings. Gender formation is mostly through society and culture. Keep in mind that gender is not predetermined based on sex. The fact is society put out some kind of gender barriers. It leads to giving special roles to males and females. This is the main reason society expects how to speak, act, and dress based on our gender.

Even though, every society has built different kinds of stereotypes about gender.

The main problem here, these stereotypes can affect people’s lives in many ways.

Here are four kinds of basic stereotypes that exist in our society.

As per society’s expectations, women should be always emotional and adjust while men expected to be self-confident and aggressive.

Some people’s mind is already set like nurses and teachers are women and pilots, doctors and engineers are men.

For example, men are generally tall, muscular, and wear pants and shirts. While women are supposed to be thin, graceful, and wear dresses with make-up.

How can you fight against stereotypes?

There is a very high chance you might have experienced some kind of sexism or gender discrimination. But you won’t have any kind of idea how to react to it. Because society will be against you.

Here are some ways to fight against gender discrimination.

Be the one who makes sound against these stereotypes. It will be hard at the beginning for sure. Don’t mind it, go forward. Talk about your problem with friends and family.

Be a role model for others. Build a community of people who express the same thought as you.

If you see someone make comments or jokes based on sex or gender, try to correct them.

What are the four genders?

Conclusion:- We are all humans. We are all different. Accept the diversity. Respect everyone. Sex is determined based on biological factors and gender is a social stereotype.

Are you the one person who suffers from depression just by thinking about these kinds of issues? Or someone who is depressed about thinking various things?

The service of doctors in this kind of situation can help you a lot. So, now you can make appointments with psychologists online using ShopDoc.

Also, don’t hesitate to make a phone call to us!