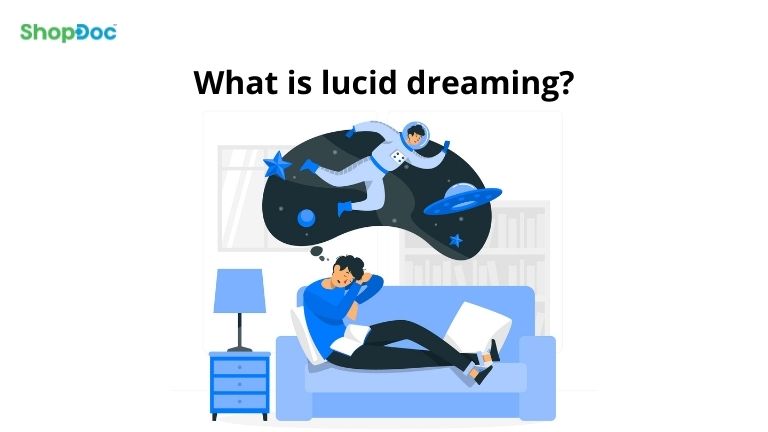 Lucid dreaming is a type of dreaming when one is aware that he is dreaming while he is in sleep. Some go on to call these dreams in which the sleeper has power over certain aspects of their surroundings and control the direction of their dreams.

A Dutch author and psychiatrist frederik van Eeden named this process lucid dreaming in his article ‘A study of dreams’. Several studies and research on lucid dreaming are still ongoing.

Origin of lucid dreaming is from ancient hindu culture of Yoga and the Tibetan Buddhist practice of dream yoga.There are also early references to the occurrence of lucid dreaming in ancient Greek texts. Later on, lucid dreaming was studied and researched by a number of psychologists, philosophers, and physicians.

Even if our understanding of lucid dreaming is limited, we now have access to the outcomes of these investigations.

Is it bad to lucid dream ?

Lucid dreaming can disrupt one’s sleeping patterns. This can cause sleeping problems and mental instability in a person.

Studies show that the rate of occurrence of anxiety is higher in the people who have lucid dreaming often.

Reality and dreaming come to merge in lucid dreaming, making it impossible to tell which is genuine and which is not. This can cause conflicts and imbalance in human mind

People get disconnected from the environment and themselves.

How to have lucid dreams ?

Through continuous practice people acquire control over their conscience in sleep and gain the ability to lucid dream. Few known techniques to control your own dreams are :

In this technique, practice lying down and relaxing until you get a hypnagogic hallucination, which is a hallucination that occurs right before you fall asleep. WILD is an easy game to play, but it’s challenging to master.

You set the aim to recall that you’re dreaming in MILD. It is based on a habit known as prospective memory, which involves making a mental note of something you want to do later.

First set an alarm for 5 hours after the time you will fall asleep, go to sleep and when the alarm goes off wake up and stay up for 30 minutes doing any activity that requires your full attention,now go back to sleep.

Reality testing method necessitates participants performing tests that distinguish between sleep and awake throughout the day. Because self-awareness is impossible in non-lucid dreams, being able to answer this question demonstrates that they are awake. The idea behind reality testing is that repeated testing will eventually sink into the dreams and then he/she will be able to gain lucidity and differentiate between the dream and waking states.

Flashing lights or other stimuli are generated while the person is in REM sleep throughout this technique. The idea behind this is that the sleeper would blend these sensations into their dreams, resulting in lucidity.

Try the strategies given above if you want to lucid dream. These techniques can help you educate your mind to be aware of your own consciousness when sleeping and act as a stress reliever.

If you believe you need support, have a sleep disorder, PTSD, or any other mental health illness, it is recommended that you consult a doctor.