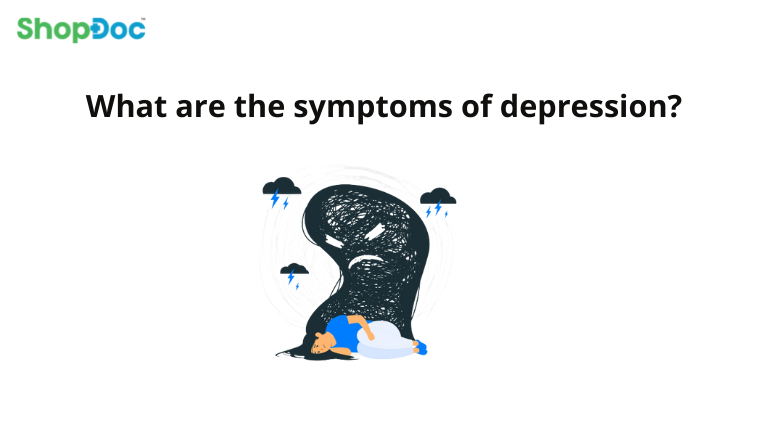 People often confuse being unhappy with depression. Being unhappy is not the same as being depressed. Depression is a term that is frequently used to describe how we feel after a difficult week at work or when we are going through a breakup. However, major depressive disorder, a kind of depression, is far more complex. There are some unique signs that distinguish depression from the sadness that we all experience from time to time.

Depression is a common term and a popular cause of concern nowadays. It is a universal truth that Covid-19 has played a major role in causing a mental imbalance in people.

Unemployment, homeschooling of children, work from home, lack of contact with other family members, restricted social life, and several other factors have triggered these mental conditions in people so what is actually depression? And what are its symptoms?.

Depression is a mental condition that causes chronic sadness and loss of interest. It affects how you feel, think, and behave and can lead to a variety of mental and physical difficulties. It is also known as major depressive disorder or clinical depression.

Symptoms of depression can be:

Depression is a mental condition that impacts how you feel about yourself and your life as a whole hence the most prevalent symptom of depression is a hopeless or useless view of life. Along with hopelessness other emotions that may arise with depression are worthlessness, self-hatred, or inappropriate guilt.

While depression has not been proven to induce anxiety, the two disorders frequently coexist. Anxiety symptoms might include:

Depression can rob you of the pleasure or happiness you get from doing the things you appreciate and another telltale indicator of significant depression is loss of interest or withdrawal from activities that you once looked forward to, such as sports and hobbies.

Sex is another area in which you may lose interest so a decrease in libido drive and even impotence are symptoms of serious depression.

fatigue is one of the reasons that you may stop doing things you usually enjoyed so depression is frequently accompanied by a lack of energy and an excessive sense of exhaustion, which can be among the most incapacitating symptoms of depression. This may result in excessive sleeping.

Depression and sleeplessness are also related, as one can lead to the other. They can also aggravate each other. Lack of quality, undisturbed sleep can exacerbate anxiety

People suffering from depression may have fluctuations in their weight and appetite. Each person’s experience will be unique. Some people will gain weight because of their increased appetite, while others may lose weight because they are not hungry.

You may be experiencing an outpouring of rage but the next thing you know, you’re sobbing uncontrollably. Nothing outside of you caused the change, yet your emotions are volatile at best. Depression can cause mood swings.

In a survey conducted in the year 2013, it is found that 42,000 people committed suicide in the United States only due to depression. Depression often related to suicide

Suicidal people frequently exhibit symptoms first. Before ultimately ending their life, many people will talk about it or make the first attempt. If you believe someone is in immediate danger of self-harm or harming another person, take the following steps:

If anyone you know or yourself feels like having depression or suicidal thoughts, dial your local emergency number right away, talk to a psychologist, or confide in a trusted relative or friend.