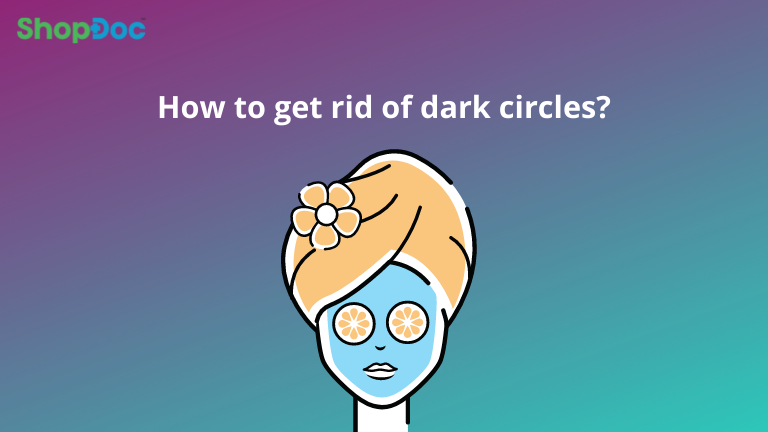 Dark circles or Periorbital dark circles are dark pigmentation effects under the lower eyelids. It’s common in men and women and often accompanied by eye bags. Dark circles can make you appear older than you actually are.

It generally appears in elderly people and people with a genetic predisposition to this condition. These circles are rarely a cause for concern, but people may wish to get rid of dark circles for cosmetic reasons.

Even though it can happen to anyone dark circles are common in people who are from non-white ethnic groups since darker skin tone is more prone to hyperpigmentation around the eye area.

What are the main causes of dark circles ?

Some of the most common causes for dark circles are:

Thinning of the skin around the eyes by loss of fatty tissue is part of the aging process. Which can cause dark circles. As this occurs, the dark blood vessels beneath your skin become more visible causing the area below your eyes to darken hence it forms a dark circle under the eye.

When your body is not receiving the proper amount of water, the skin beneath your eyes begins to look dull and your eyes look sunken. Dehydration is a common cause of dark circles under your eyes.

Changes in your sleeping time, oversleeping, extreme fatigue, or staying up late can cause your skin to become pale, allowing blood vessels under your skin to show up this can lead to the formation of dark circles under the eyes.

Working on a computer or watching television screens for a long time can cause strain in your eyes. This leads blood vessels under the eye to enlarge and become visible, this causes dark circles to form under your eyes.

When you have an allergic reaction, your body releases histamines as a response to it. This histamine causes uncomfortable symptoms like itchiness, redness, and puffy eyes. Histamines also cause your blood vessels to dilate and become more visible beneath your skin.

Family history also plays a part in developing dark circles under your eyes, it may start to appear in childhood. Other underlying medical conditions can also result in dark circles beneath your eyes.

How can I remove dark circles ?

There are a few home remedies that you can use to reduce the effect of dark circles. Some of the known home treatment methods are:

Cucumber is rich in vitamin C content and water it moisturizes and nourishes the skin. Applying cucumber slices on the eyes may soothe tired eyes and reduce swelling.

Teabags usually do the trick, caffeine has antioxidant properties which improve blood circulation. Applying tea bags to a specific area can help lessen the dark circle and puffiness under the skin.

Applying a cold compress to the eyes can constrict blood vessels and can help to reduce swelling and shrink dilated blood vessels reducing the appearance of dark circles.

Catching up on sleep can also help reduce the appearance of dark circles. Sleep deprivation can cause your skin to appear pale, making the dark circles more obvious. Allow yourself seven to eight hours of rest to prevent dark circles from appearing.

Generally, dark circles aren’t permanent, it is just a temporary pigmentation under the eyelids because of various causes or health conditions and there are ways to revert the dark area to its original color.

However, as you grow older there are chances that your skin loses its collagen to maintain its elasticity and also become much thinner and translucent and make those dark circles permanent. You can also get help from an expert if the problem persists.