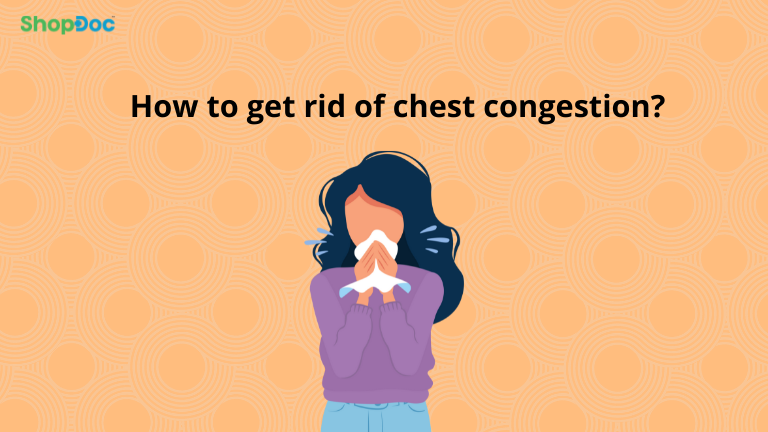 The collection of mucus in the lungs and lower breathing tubes(bronchi) causes chest congestion. It is generally followed by a loud, chronic cough that produces thick mucus. When you breathe in and out, you may hear or feel whistling or roaring sounds from your chest.

Chest congestions can be painful. Even though it is not a life-threatening condition it gives you a hard time when you cough and breath, which can be depressing.

What is chest congestion?

Chest congestion is a sign of a respiratory infection, like a common cold, or more serious infections such as bronchitis. Because of such infections your body has to produce excess fluids in the lungs to fight against those infections, called mucus or phlegm.

The presence of excess mucus produced to remove the irritant and reduce the inflammation accumulates in the chest and causes this condition of congestion. Chest congestion is that tight chest, can’t breathe feeling that comes with cold and other infections.

Phlegm is a type of mucus in the lungs. Due to the infections, excess phlegm is produced in the lungs. This causes blockage of the respiratory pathway which leads to difficulty in breathing.

Excess mucus in the chest triggers coughing. Which can be loud, roaring and painful in nature. Though this can be uncomfortable, it is actually beneficial and the most effective technique to remove infections from the airways.

As previously stated, phlegm and mucus production will increase in an attempt to clear your lungs of bacteria or viruses. Sputum is coughed up mucus that can range in colour from clear to green to brown.

Liquids aid in the thinning of mucus. Warm liquids, in particular, can aid in the removal of mucus from the lungs and nose. This can alleviate congestion, providing you with some relief from your symptoms.

It may be useful to use the humidifier at night and keep it close to your bed. This can help relieve congestion while you sleep, allowing you to sleep more soundly.

Keep your bedroom door and window closed to prevent vapour from escaping.

Fill a large bowl with hot water in your sink for more targeted steam. Lean over the bowl and cover your head with a hand towel to help trap the steam surrounding your face.

There are no hard and fast rules for how long you should stay in the steam, so use your best judgement.

Studies show that along with other medicinal sides honey has a good effect on chest congestion and cough. Being natural decongestant honey soothes the throat and chest.

Honey may also help break up the mucus that is making it difficult to breathe and reduce inflammation in the bronchi (airways within the lungs).

Fill a bowl halfway with boiling water and add a few drops of essential oil. To help trap the steam, lean over the bowl and cover your head with a hand towel. For 5 to 10 minutes, inhale the steam.