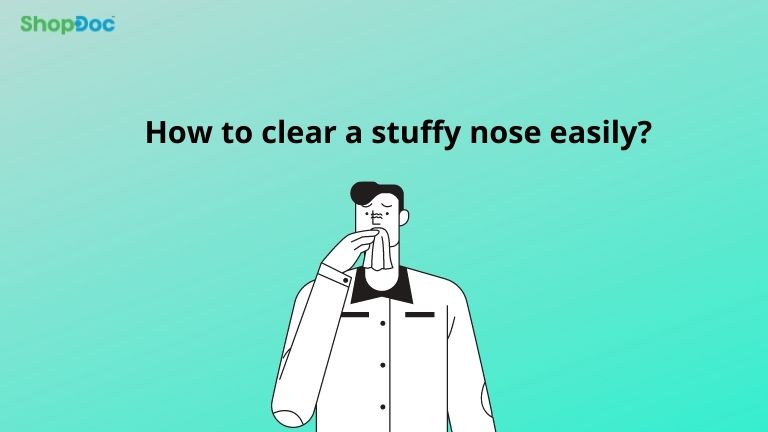 A stuffy nose is also known as nasal congestion. It can be bothersome and can frequently interrupt your daily chores. There is a myth between people that a stuffy nose is caused by too much mucus in the nasal passages.

Irritated blood vessels in the sinuses cause congested noses. These blood vessels might become inflamed as a result of a cold, the flu, allergies, or a sinus infection.

Whatever the cause of your stuffy nose, there are simple ways to relieve it. Here are some things you can do right now to improve your mood and breathing.

What causes a stuffy nose?

Anything that irritates or causes inflammation to the nasal tissues might induce nasal congestion. Infections such as colds, flu, or sinusitis, as well as allergies, cause nasal congestion and runny nose frequently. Irritants like cigarette smoke and automobile exhaust can sometimes induce a stuffy and runny nose.

Few ways to clear a stuffy nose and congestion

There are several ways to clear a stuffy nose and congestion due to it. Few known and most assured ways are:

A humidifier is a quick and easy solution to ease sinus pain and nasal congestion.

It transforms water into moisture, which progressively fills the air and raises the humidity level in a room.

Breathing in this wet air might help to relieve sore tissues and enlarged blood vessels in your nose and sinuses. Some people believe that hot, humidified air can assist clogged mucus discharge more effectively.

Using a nasal saline solution will help to keep your nostrils wet. Saline solutions can also work to reduce inflammations in the nasal passage.

A warm compress may help to ease some nasal congestion symptoms by opening the nasal passages from the outside.

To begin making a warm compress,

The warmth can provide relief from pain and aid in the reduction of inflammation in the nose. Repeat this as many times necessary.

There are several ways to clear clogged nostrils. In Ayurveda, there is a technique in which water is let to pass through one nostril and gets it out through the other nostril.

The same technique can be adapted with the help of a neti pot. A neti pot is a cylinder-like device used to remove mucus and fluids from your nasal passages.

It works almost the same function as a humidifier does in a room. But steaming concentrates it to your nasal passage and gives a compounded effect.

While it won’t bring immediate relief, staying hydrated and consuming plenty of (nonalcoholic) drinks will assist to thin mucus in the nasal passages, making it easier for clogged sinuses to drain.

Though many individuals testify that sipping specifically hot tea can relieve congestion, it’s unlikely that it makes a difference whether the beverages you seek are hot or cold.

A stuffy nose can be painful, but several over-the-counter (OTC) drugs can help clean up your nasal passages and also provide relief.

When selecting a decongestant, antihistamine, or allergy medication, consult with a pharmacist. In addition, the pharmacist can address any questions you may have regarding a particular drug.

Does blowing your nose make it worse?

Experts claim that blowing your nose may aggravate your symptoms. That’s because the pressure in your nose is increasing. Mucus may start going up into your nostrils instead of out your nose as a result of the pressure. This mucus may include viruses or germs when you’re unwell.

Consult a doctor if you are having stuffy nose symptoms. Also, get a doctor’s prescription before you take medications on your own.