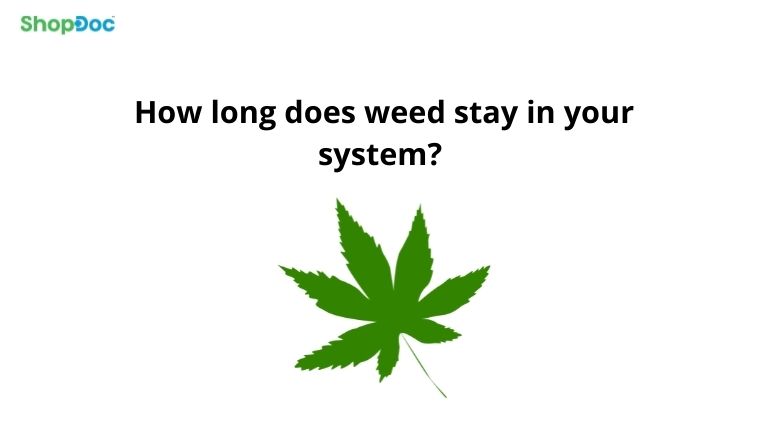 Weed known as marijuana or cannabis is a greenish-gray mixture of the dried flowers of Cannabis sativa. Some people smoke marijuana in cigarettes.

The length of time marijuana stays in a person’s system varies, as it does with many other narcotics. However there are different tests to indent the amount of Tetrahydrocannabinol (THC) in marijuana, body metabolism and hydration all have an impact on the period of time that weed can stay in your system.

The period that weed stays in your system depends on several factors, few known factors are:

THC concentrations in the body rise as a result of dehydration. Hence severe dehydration can give marijuana positive results on drug tests. While drinking a lot of water is not to have a substantial impact on a drug test

Alcohol and other drugs can vanish from the body in as little as a few hours. Weed, on the other hand, lasts far longer.

How long does it take to feel the effects  of weed?

The effects of marijuana occur fast, usually within 15 to 30 minutes after smoking. And hence when weed is consumed, it can take up to two hours to feel its effects. Moreover, the effects are:

Can weed be detected in regular blood tests?

Experts say that normal blood tests usually don’t detect THC in blood. it will not show up unless they are testing for drugs. You’re fine if you’re going in for a general health examination. Even if it showed up, you’d be fine because your doctor couldn’t expose it because they weren’t administering a drug test.

The urine test is the most common test used in detecting the presence of drugs in the body.

It is said during these blood tests weed is detectable till one or two days after intake. In chronic users, it is detectable for 25 days and for some even after that.

Weed is detectable in saliva, 1-3 days in occasional users and 1-25 days in chronic users.

Weed enters the hair follicles through small blood vessels. It’s possible that traces of the drug will stay in the hair for a period of time.

Using weed or marijuana can cause an imbalance in your mental health and also problems with your other internal body parts. So if you think you need medical or mental support consult a physician as soon as possible.