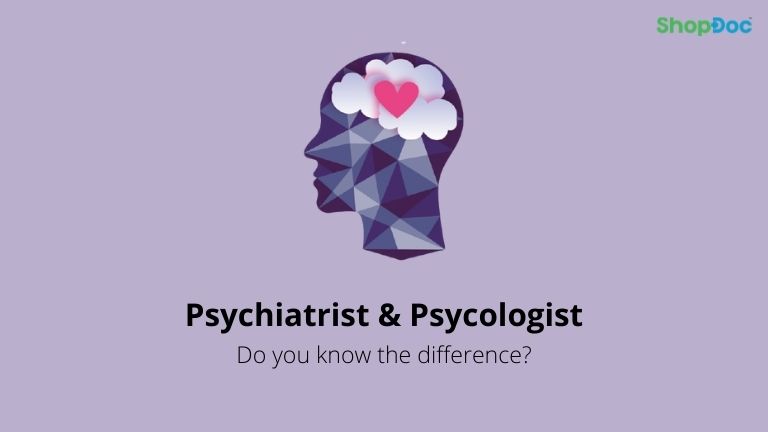 We all know that mental health is very important as that of physical health. So when it comes to mental health, the names of two health specialists come into our minds. Yes, Psychiatrist and Psychologist. But when somebody asks, whom should we approach it’s a little bit confusing right?

What are the differences in their practices?

Psychologists and psychiatrists adopt different methods to treat mental health issues. But in some instances, they opt to choose a different environment too.

Usually, psychiatrists can work in the following environments such as:

Psychiatrists usually treat people with a wide variety of mental health issues. Some of them include:

The tests and evaluations used by a psychologist to diagnose and treat these mental health  issues include:

Soon after the diagnosing procedure, the psychologist may refer you to a psychotherapist or use medication. Some of the most common medications used by a psychologist to treat mental health conditions are:

After prescribing medication for treatment, your psychologist will observe you loosely for improvements. Medications can be changed accordingly depending upon the condition of the patient.

Besides medication, psychologists can also adopt treatment methods such as:

Electroconvulsive therapy is a method of passing electric currents through the brain intentionally. This method is only used in cases where the patient is possessing heavy depression and doesn’t respond to any other treatment methods.

Electroconvulsive therapy may not be effective for everyone and can cause some side effects too. So to avoid the possible risks and to achieve maximum success, this method is administrated using a controlled amount of electricity.

Light therapy is a common method to treat issues such as SAD or Seasonal Affective Disorder. This method is used to treat people with mental health issues with the help of exposing them to light.

Light therapy is proved to be one of the best methods to treat mood and sleep disorders and thus easing SAD symptoms. This method is also known as bright light therapy or phototherapy.

One of the most important differences between a psychiatrist and a psychologist is that psychologists cannot prescribe medications. But they can undergo a wide variety of treatment procedures.

A psychologist can usually work in the following environments such as:

There are many forms of talk therapy including:

One-on-one therapy is the most common therapy used to heal the mental problems a person is facing. In one-on-one therapy, the patient usually meets the doctor individually and talks about mental health issues so to know about the factors that cause the problem.

Family therapy is a type of psychotherapy that is designed to identify the behavior and attitude of family members. So if their attitudes can cause a negative impact on the patient, then they must be corrected to change their attitude.

In group therapy, the psychologist executes his therapy to a group of people. Sometimes more than one therapist deals with several people who are facing mental health issues. Group therapy can have a group of three to four people and sometimes eight to twelve people or more.

What are the differences in their education?

Psychologists and psychiatrists differ in their educational levels too. Let’s see how.

Usually psychiatrist graduates from college with either MD(Doctor of Medicine) or DO(Doctor of osteopathic medicine). So after completing the degree, they must undergo a four-year residency to become a practicing psychiatrist.

After completing the exam given by the board of psychiatry, to become board certified. Some psychiatrists take extra training in forensic psychiatry, sleep medicines, pain medicines, child and adolescent psychiatry, etc.

After completing doctoral-level training, psychologists can pursue either Doctor of Philosophy(Ph.D.) or a Doctor of Psychology(PsyD). Then it takes one or two years of training which includes working with people.

Soon after the training, they must attempt and pass an exam so as to get certified. Psychologists can also undergo specialty training in areas such as clinical psychology, neuropsychology, forensic psychology, child and adolescent psychology, etc.

How to choose between the two?

So, now the question is how to choose between the two. You should consider consulting a psychiatrist if you have symptoms such as

But consulting a psychologist will be a better option if  you