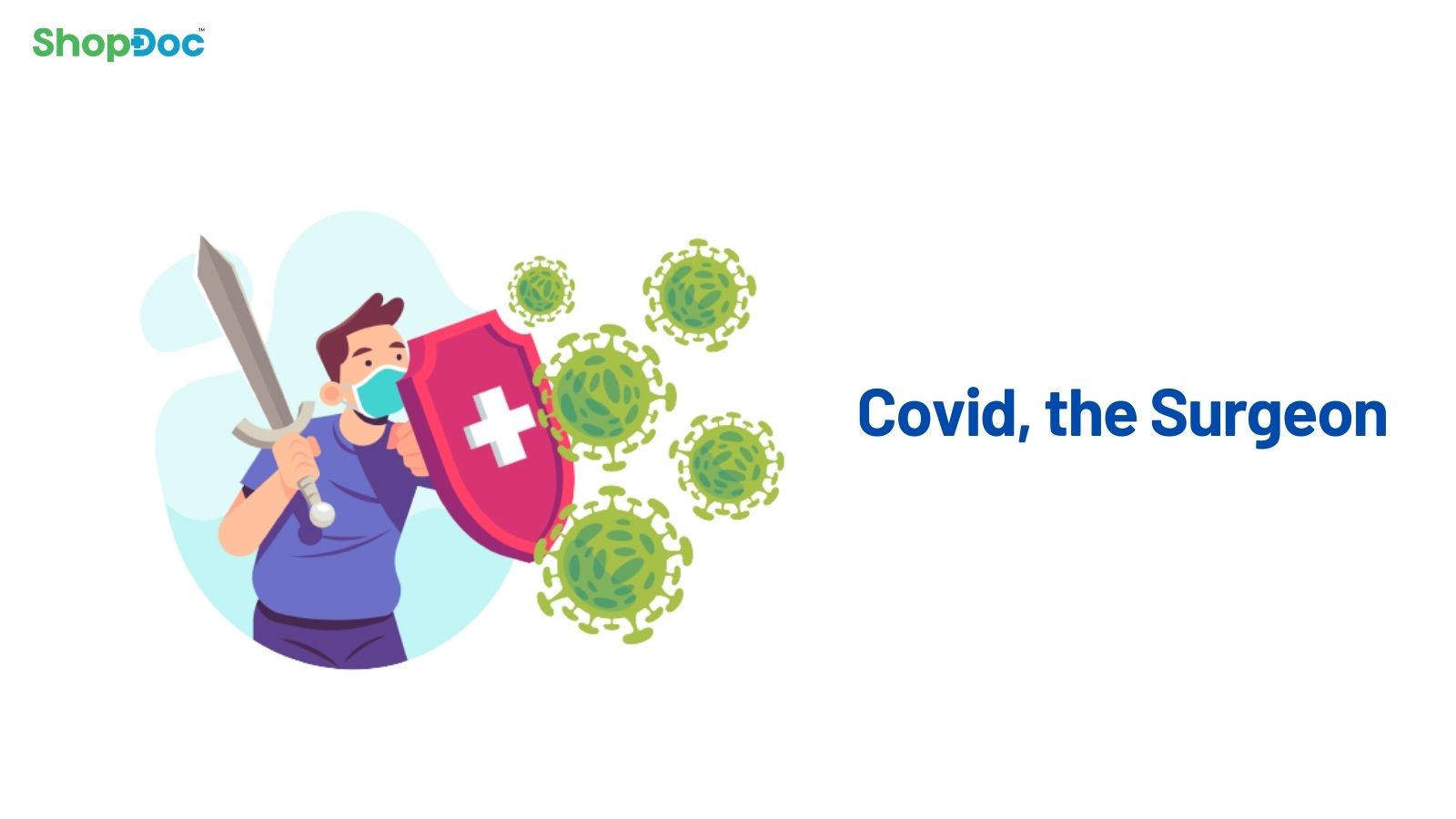 But it seems ‘Lasik’ surgery is a trend nowadays. People who have bad eyesight go and do the surgery to get their eyesight permanently back to normal. Patients who have done the Lasik surgery say things like, “Not searching for your glasses first thing when you wake up is such a liberation!” or “I’ve never quite appreciated how good it felt to see things sharp and clear!”

They weren’t blind, but they had become blind to what was normal. Once they got back what they were born with, they’d realized what they were missing out on.

We’re blind too. Blind about how much we pollute the Earth. And thus, our bodies.

Covid isn’t so new anymore. Regardless of how dangerous it still is, people aren’t scared of it anymore. Of Covid –

the surgeon; Wait. What?

Yeah, I’d say Covid is the surgeon who performed Lasik on the world. A world not blind by eyesight, but blind to what was normal. We don’t know what normal is any more. Maybe if we could ask our ancestors, we just might be able to know. Has anyone got a time machine handy?

In 400 BCE, when Hippocrates wrote down the relation between air and health, he didn’t even imagine that after two and a half millennia, 9 million people would die in a year due to that relation. ( 8.7M died globally in 2018 due to air pollution: Report ) People have forgotten what it was like when cancer wasn’t so common. When smog-filled cities weren’t a thing, when breathing air was a pleasure, and when animals didn’t die due to waste dumps.

The new generation runs to find a cure for cancer. The doctors and scientists themselves say,

Cure the disease, not the symptom.

And yet, the cure to so many diseases and suffering lay in love. Just a little love and gratitude to Mother Earth who bore us for seven million years. We haven’t found another Earth close by, nor has Elon Musk figured out the whole living-in-Mars-thing. Then what on earth is the hurry to make Earth a trash can?

Hundreds of billions of dollars have been spent on cancer research. What if a part of it was spent on making industries more eco-friendly? Wouldn’t that have reduced the number of sick people that need to be cured?

Sometimes we need to ask ourselves the hard questions. The ones that we don’t want to answer. Why – we don’t even want to think about those things. But don’t fret, it is a normal human condition. We human beings tend to ignore the truths in our life that we don’t want to believe. No matter how glaringly obvious it is, we create our truths. So yeah, whether we like it or not, we live in our made-up reality.

We all are waiting. Waiting for someone to fix the ozone layer for us. To get all the excess carbon dioxide out of the atmosphere for us. What about us? Duh. No, of course not. We’ve got bigger things to worry about. Like going to college or pleasing your boss. I mean, things wouldn’t get that bad before we die, right? Right?

Just don’t ask that to the people of Delhi.

We all get clarity just a bit too late. As they say, hindsight is 20/20. But what use is hindsight other than to sigh out loud? People complain Greta Thunberg is too angry. We would be too, if only we had a broader perspective. There’ll always be the Smaller Things. But as long as we don’t figure out the time to do the Larger Things, we won’t need to worry about Smaller Things for very long.

There are always some people worried about the Earth. Like ‘actually’ worried. But they’d never got a loud enough stage to tell the world their worries.

Initially, (when people were afraid of the virus) we stuck to our homes. The roads emptied. Factories stopped. Airplanes were grounded. A world so busy stopped to take a breath. And in the silence that followed, what they saw surprised them.

The air they never knew to be dusty, cleared.

Even though it seemed this was perfect for nature, a world like that was not sustainable. In fact, during this lockdown period, it was the poor who suffered the most. But only when the cogs stopped turning did we realize how much damage we were doing to the Earth.

In 2019, people in Punjab were amazed that they could see the Himalayas right from their windows. Reports say that this has happened after a long thirty years! Covid had performed Lasik!

But the question remains: Now that the people can see clearly, will they choose to open their eyes?

Covid came around and taught us so many things. It sure didn’t come for free; for 5.3 million people aren’t around to see what Covid taught us. But the most important thing it taught is surely the damage we are doing to the world, and hence to ourselves.

This Lasik was a deal with the Devil. But we humans are stupid, we’ll throw away what the Devil got us and go our ways again. We’ll close our eyes. Very soon.

Going eco-friendly won’t be easy. It will be slightly more expensive. We’ll have to be more deliberate in our actions. We’ll have to deviate slightly from the ‘most convenient’ methods that we have been pampered by.

As soon as people stop believing that global warming, air pollution, and all other nature-tortures that we do are just things that come and go on the TV, things will start to change. For the Bazzillionth time, people, these kinds of stuff are REAL!

Governments and organizations will have to put more effort into creating awareness (ugh, that sounds so cliché!), create a thought process before all manufacturing, and use eyelid speculums on people so that they keep their eyes open! In today’s world, electronics manufacturers will have to focus just a tad bit less on profit, and more on Earth. That in itself will make a huge difference.

All these things; they’re hard – because our brains are wired like that. It rewards us for instant gratification and gives less importance to long-term goals. It’s easier to eat cake than to think about that lean, sinewy bod you’d wanted, and it’s easier going to the supermarket hands-free than taking a cloth bag with you. Those little things! It has always been the little things. So human, do you still plan to live life the most convenient way possible, or will you be another mobile tower broadcasting this message?